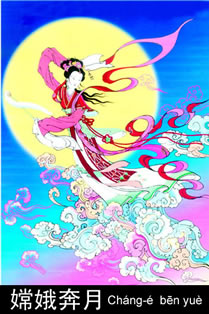 The festival is sometimes referred to as the Women’s Festival since the moon symbolizes beauty and elegance and there are folktales about a moon maiden. Originally the legend starts with a time of trouble on the earth when ten suns appeared at once and scorched the earth with unbearable heat. The Emperor ordered a famous archer to shoot down the nine extra suns and save all the inhabitants of the earth from scorched and drought. Once that was accomplished the Goddess of Heaven rewards the archer with an elixir that would make him immortal. He and his wife, who was the love of his life and very beautiful, decide to drink it together on the 15th day of the 8th month of the lunar year. However an evil person overheard the famous archer and his wife making plans to drink the elixir and become immortal, so the evil person shot and killed the archer. The grief stricken wife, Chang’e, drank the elixir by herself and chooses to live on the moon. She is considered to be the enchanted moon lady who never forgets her deep love for her husband. Even though she can live in Heaven, she chooses to live a simple and contented life on the moon in order to be near mortals who can empathize with her and who have shared her happiness and sadness. All family members try to get together for this special day and those who cannot return home watch the bright moonlights and have a deep longing to be with their loved ones. Thus it is a festival often associated with love and romance and thus makes the 8th month the most popular month for weddings, much as is June in Western culture.

There is a compelling practical story behind the moon cakes in that they were essential to a key military victory in China’s history. As the moon cakes were popular during the Southern Song Dynasty (1127-1279), they became a key ingredient in a rebellion to overthrow the ruling Mongol army. Since the Mongols did not eat moon cakes, the Han Chinese people stuffed notes inside the little cakes that indicated the Mid-Autumn festival as the date of the uprising and distributed the cakes widely. This resulted in a major insurgency that led a nationwide revolt that brought down the Mongols in 1368.

How to Celebrate the Moon Festival

Today the Moon festival is celebrated by family gatherings, and feasts, followed by sharing legends of the festivals, looking at the moon and eating moon cakes. Generally one moon cake is cut in quarters or eighths and a small bit is eaten with a cup of steaming hot tea. There are hundreds of varieties of moon cakes on sale in the month before Moon Festival. Some bakeries in China, particularly in Shanghai have developed exotic flavors that include shark fin and pearl dust and therefore have become expensive and exclusive. Other unusual variations include green tea moon cakes, Chinese sausage ones or a Southeast Asian variety cooked with glutinous rice flour. Hagen-Daz has even responded to the market with a line of ice cream moon cakes in Asian markets. Many people regard moon cakes though as similar to fruitcakes in the U.S., an obliged tradition. 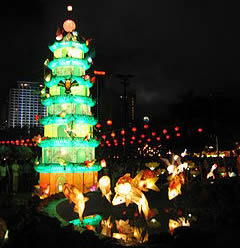 Generally, people in China hold family reunion dinners and go out to attend special performances in parks or public squares. In different parts of China, the festival has some variations. In Guangzhou, there is a huge lantern show which is a big attraction for local citizens. Thousands of differently-shaped lanterns are lit which creates a nice colorful contrast with the bright moonlight. In the Eastern part of China, in Zhejiang province, people watch the flood tide of the Qingtang River and visitors from other provinces attend as well. The ebb and flow of the tide coincides with the waxing and waning of the moon with its strong gravitational pull. Spectators crowd on the riverbank of the Qiantang River to watch the roaring waves, which rise approximately 10 feet.

In Hong Kong, parents allow children to stay up late and families travel to high vantage points such as the Peak to light lanterns and watch the huge autumn moon rise, while eating moon cakes. Parks are lit up with thousands of lanterns in every color, shape and size. There is also a fire dragon parade, with a 200 foot dragon winding its way through streets near Victoria Park to fend off any plague.
In all parts of China, it is considered an essential holiday for reuniting with family, much as Thanksgiving is for Americans. It is especially a fun one for children, who get to feast, stay up late, and enjoy brightly lit lanterns, puppet shows and have lantern processions. However your family chooses to celebrate, we wish you many fine memories of this year’s Mid-Autumn Festival. We’d love to see your photos if you’d like. You can send them to info@lotustours.net