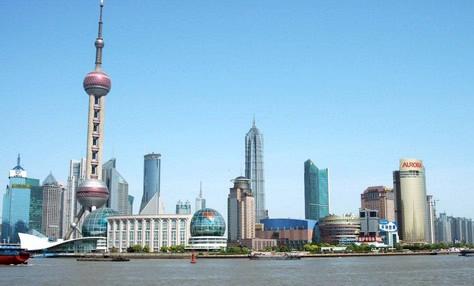 Shanghai, lies at the central section of North-South coastline of China, covering 63,405 square kilometers, is the largest city in China. Opening gateway to foreign countries in the eventful 20th century, it has gradually prosperous international metropolitan. Now it is known as the Paris of the East, and is the commercial and financial center of China. Over 300 of the world’s top 500 enterprises have branches there. Its modern, international and fashionable reputation entices millions of travelers each year.

The Bund is the image of Shanghai and the city's main attraction. Sweeping along the western side of the Huangpu River, the majestic buildings date back to Shanghai's grandest days. Many banks and financial companies built impressive offices here in the early 20th. They’re a pack of the world architecture, which reflect the wisdom and efforts of architects, engineers, and workers--both foreign and domestic--and are a precious legacy to the world.

Accomplished in 1577 by government officer in Ming Dynasty, Yuyuan Garden is one of the few remaining old tourist sites in Shanghai. It is a famous classical Garden with the intricately designed pathways, pavilions, koi stocked pools and quiet courtyards. The Grand Rockery, with a height of 14 meters, is in the center of the Garden and is the most renowned sight. There are six main scenic areas in the garden: Sansui Hall, Wanhua Chamber, Dianchun Hall, Huijing Hall, Yuhua Hall and the Inner Garden. Each area features several scenic spots within its borders.

The Jade Buddha Temple, also called Yufo Temple, is one of the most famous Chinese Buddhist temples, the present temple draws from both the Chan and Pure Land traditions of Mahayana Buddhism. As one of most precious relics in the Temple, the seated jade statue, 1.9 meters high and carved out of a single piece of jade stone has the image of a solemn Buddha and is reputed as a gem of Buddhist art works.

Located in the suburban area of Shanghai City and covers a total of 47 square kilometers, Zhujiajiao is a classic ancient water town with a history of 400 years in the south of the Yangtze River. It is also named as Pearl Stream. The whole town is crisscrossed by rivers and canals, with 9 long streets running along the rivers and thousand of buildings of Ming and Qing Dynasty architecture flanking both sides. You can stroll along the maze of paths and bridges, or take a boat ride to view the residences of this nicely-preserved village.

The Oriental Pearl Tower rises 1,536 feet in Shanghai's newest district of Pudong Area. It holds up three metallic spheres: the largest and lowest one is a dance hall and karaoke bar; the next "jewel" up is the rotating restaurant; the top and smallest one is the observation deck. On the observation deck, you will have great views of Pudong, the bund and Huangpu River. Now it services Shanghai more than just TV and radio channels, but is also one of the Shanghai's most recognized landmarks.

Located at the very center of the city, Shanghai Museum is a distinguished architectural combination of traditional feature and modern spirit. It possesses a collection of 120,000 precious works of art and has eleven galleries and three special temporary exhibition halls.

Regarded as the No.1 shopping street in mainland China, Nanjing Road is a must-see destination in Shanghai. It starts from the Bund and ends in the junction of he Jing’an Temple and Yan’an West Street, in total 5.5 kilometers. Over 600 businesses line on both sides of the street, offering wide range choices of food and products, from the world-famous brands to the traditional Chinese products, such as silk goods, jade.

With thousands of years of history, Xitang is a water town famous for its densely distributed rivers and quiet natural environment. In total 9 rivers converge in this town, dividing it into 8 sections. Bridges link this water town together. Inside the town, there are many well-preserved architectural groups constructed during the Ming and Qing dynasties, which boast a higher artistry and study value, thus being highlighted by the experts at home and abroad studying antique buildings.

Another famous water town near Shanghai, Zhouzhuang is noted for its profound cultural background, the well preserved ancient residential houses, the elegant watery views and the strong local colored traditions and customs. The local folklore, traditions and legends of this water township, the granny tea or the Wansan home-style banquet formed from the immemorial civilization and history are also the indispensable elements during the visit.

With the architecture of Shanghai in the 20th century, Shanghai Xintiandi is an urban tourist attraction permeated with the historical and cultural legacies. The Shikumen attraction was created by converting residential blocks into a multifunctional dining, retail and entertainment center flowing with restaurants, boutiques, cafes and bars of an international standard. The outside of the Shikumen buildings in Shanghai Xintiandi retain the antique walls, tiles and exterior of the Shikumen housing of old Shanghai, while the internal spaces have been designed and decorated to suit the lifestyle of the 21st century urbanites. It is regarded as the place where "yesterday meets tomorrow in Shanghai today."