Our five nights at Guilin Ming Garden were great as well! It is certainly our favorite place in China. The apartment is remodeled, extremely clean and has a great view; having internet access is a nice touch and there is plenty of room for our entire family. After a long day of fun, it was relaxing to come home to delicious home cooked meals prepared by our nanny Mrs Huang.She made us feel right at home with her traditional Cantonese home cooked dinners: her normal dinner consist of soup, two meat dishes and two vegetable dishes; very much like the meals our Cantonese parents made for us when we were younger and the meals had brought back fond memories.
-Helen Lee
more testimonials...

Long An Province is a mid-sized province located between Ho Chi Minh City to the West and the Cambodia border on the East.  The province has a total population of an estimated 1.4 million, of which more than half are laborers.  Tan An is the province capital and other major cities include Ben Luc, Duc Hoa and Thanh Hoa and Moc Hoa District.  Long An province is well known in Vietnam for production of Cho Dao rice.  Currently it is considered a prime spot for manufacturing facilities, since it borders Ho Chi Minh City.   Industrial growth jumped forward in 2002 when Ho Chi Minh City industrial leaders started moving an estimated 30,000 production businesses from the inner city to suburban locations. 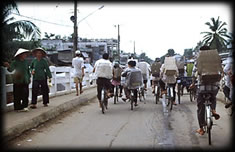 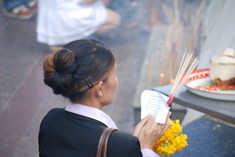 Additionally there has been a considerable influx of Hong Kong and Taiwanese companies that have chosen Long An as the location to process agricultural products for either domestic consumption or for export.   According to Long An Industrial Zones Authority there are currently 110 foreign companies already operating in Long An.  Of these 60% are Taiwanese with other major investors being from Thailand, France, the U.K. and Korea.  Total investment of these foreign firms currently exceeds $1 billion and is growing rapidly.  Production of shoes, clothing and plastics are the largest manufacturing industries province wide. 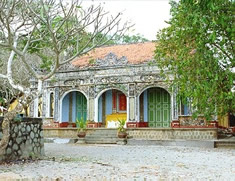 Though being the capital of the province, Tan An does not have many tourist interests and is located only 30 miles away from Ho Chi Minh City. It is convenient to organize daytrips to visit, to get a sense of a smaller, more provincial city.

Long An is well known for the Binh Ta archeological sites, such as Go Xoai, Go Don and Go Nam Tuoc. These buildings are what remain of the Oc Eo-Phu Nam culture (1st to 7th centuries AD). Attractions in the province include the Nguyen Huynh Duc temple and tomb;  the Long An lake and the Ton Thanh pagoda which was built in the 19th century.  While visiting, the pineapples and mangos from Ben Luc are considered a “must have” fresh produce treat for visitors.