Ancient Routes of the Silk Road

The Silk Road was a 1,600 km long trade route that led to the exchange of products between China and the West. In fact, besides the buying and selling of silks, many new philosophies, religions and customs reached China via the route. The first trade mission sent to the west was during the Han Dynasty, which continues to have a great impact on China and Central Asia today. In ancient times, Xian served as the final destination of the Silk Road; merchants mostly traveled westward to the Gansu province, reached Lanzhou for breaks and headed to Dunghuang on their way back to either India or eastern Mediterranean.

Besides the enhancement of trade, the Silk Road brought dominant religions, such as Hindi, Christianity, Judaism, Islam and Buddhism to China. During your Silk Road adventure, you will find cliffs, caves and villages that contain various religious artifacts and relics. The most incredible ones include the Bezeklik Thousands Buddha Caves, which carries ancient Buddhist murals and the Thousand Buddhas Grottoes remaining caves of the most impressive and best-preserved examples of Buddhist cave art in China.

Tour Overview
Tour Code: ARSR-22
Trip Duration: 15 days/14 nights
Click below for: Tour Price / Accommodations
Beijing, Urumqi, Dunhuang, JiaYuGuan, Xian, Beijing
Departure Dates: Daily
Day 1 : USA/Beijing
meals: n/a
Depart the United States today to begin your Ancient Routes of the Silk Road Tour. Cross the International Date Line en route to China.
Day 2 : Beijing
meals: n/a
Arrive in Beijing in the late afternoon. Your English-speaking tour guide and driver will meet you at the baggage claim area and provide transportation to your hotel. Have a restful evening (possibly enjoy some extra pampering at the hotel's spa or salon services!) and relax while you adjust to the time zone change and new surroundings.
Day 3 : Beijing
meals: B/L
Begin your day with a tour at the Forbidden City. Listed as a world heritage site in 1987, the Forbidden City contains the largest group of intact palace structures in the world. The palace is 720,000 square meters in size and contains 9,999 rooms, numerous pavilions, gardens and courtyards. Then visit the Tiananmen Square. Noted as the largest city square in the world, the square was initially designed for political rallies and important gala events. Today the square is flanked by the Forbidden City in the north, the Great Hall of the People in the west, Mao TseTung's Mausoleum in the south and the Museum of Chinese Revolution and the Museum of Chinese History in the east. This afternoon, stop by at the major 2008 Olympic Venues including the National Stadiums - "Bird's Nest", the National Aquatics Center - "Watercube" on the way to the imperial gardens of the Summer Palace. The palace was originally built in 1750 and was rebuilt in 1886. Located in the western outskirts of the city, the Summer Palace is the leading classical garden in China and a UNESCO world heritage site.
Day 4 : Beijing
meals: B/L
Visit the UNESCO world heritage site today. Begin your day with a tour at the MuTianYu section of the Great Wall. Constructed more than 2,000 years ago by China's first emperor, the ancient wall is the world's longest man-made structure at approximately 4,000 miles in length.
Day 5 : Beijing/Urumqi
meals: B/L
Your guide will transfer you to the airport for your flight to Urumqi (fine pasture in Mongolia). Your local English-speaking guide and driver will meet you at the Urumqi airport and send you to your hotel where you may check in and rest.
Day 6 : Urumqi
meals: B/L
After breakfast, begin your tour of Urumqi with a visit at the Lake of Heaven (Tianchi). Located among pine trees, grassy meadows and snowcapped peaks, the lake bears a sharp contrast to the sand dunes and dry conditions of Urumqi and its surrounding areas. After lunch, visit the Xinjiang Autonomous Region Museum to browse through numerous artifacts related to the 13 Chinese ethnic minority groups that reside in the region. Continue on to the local Bazaar to experience the local way of trading and shopping of common goods, antiques and food items.
Day 7 : Urumqi/Turpan
meals: B/L
Travel to the oasis town of Turpan by car today to explore the Flaming Mountains (Huoyanshan). Appropriately named, the hills appear to be on fire under the sun. Explore the ancient Buddhist murals of the Bezeklik Thousand Buddha Caves near the Flaming Mountains. After lunch, continue your tour at the Atsana Ancient Tombs to visit three of the 500 area tombs dating from the Tang Dynasty. Artifacts on display include silks, brocades, important historical records and funerary objects.
Day 8 : Turpan
meals: B/L
After breakfast, visit the ancient Jiaohe Ruins (confluence of two rivers), which was established by the Chinese as a stronghold to defend the neighboring lands during the Han Dynasty. Your tour continues with a visit to the 18th century Emin Minaret and adjoining mosque built in Afghani style with its decorative 44-meter high circular minaret. This afternoon, visit the Karez Wells, one of China's greatest public works projects. The ancient well system, constructed by hand and simple tools is made up of a series of wells and underground channels over 3,000 km in length and linked together to utilize the force of gravity to bring water to the surface.
Day 9 : Turpan/Dunhuang
meals: B/L 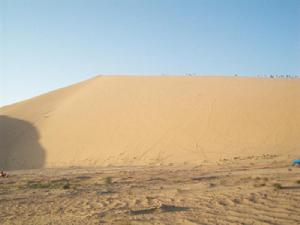 After breakfast transfer to high speed train station and will transport you to the oasis town of Dunhuang with its dramatic views of mountainous sand dunes and lush green fields. Upon your arrival at Dunhuang, your English-speaking tour guide and driver will meet you and show you around Dunhuang. Founded in 111 BC, Dunhuang was once an important stopping point on the Silk Road. The 1,600 km trade route splits into both northern and southern routes from Dunhuang, giving the city a rich cultural and historical background. Begin your visit at the Dunhuang County Museum displaying Chinese and Tibetan scriptures unearthed at Mogao; sacrificial objects from the Han and Tang Dynasties and relics such as silks and brocades. Continue on to the Singing Sand Dunes (Mingshashan), which contain the most spectacular sand dune scenery in China, with dunes 200 to 300 meters high. During windy weather conditions, the sand reportedly makes humming sounds and hence receiving the name "Singing Sand Dunes". Fun activities at the dunes include climbing, paragliding, sand sledding and camel riding.
Day 10 : Dunhuang
meals: B/L
This morning visit the Mogao Caves (also known as Caves of a Thousand Buddhas). The caves are the most impressive and best-preserved examples of Buddhist cave art in China, housing more than 2,415 painted statues and 4,500 square meters of painted murals. This afternoon, travel out of Dunhuang to Jade Gate Pass (Yumenguan) once used to mark the western border of China. On the return trip to Dunhuang, stop at the nine- tiered White Horse Dagoba (Baima Ta).
Day 11 : Dunhuang/JiaYuGuan
meals: B/L
Travel by car this morning to the ancient outpost city of JiaYuGuan where the Ming emperor constructed the last fortress of the Great Wall in 1372. This afternoon, visit the Great Wall Museum and gain some knowledge regarding the comprehensive and systematic history of the Great Wall. Comprised of a "beacon tower" style complex, the museum is made up of seven different sections with displays, artworks and photos.
Day 12 : JiaYuGuan/Xian
meals: B/L
Visit the JiaYuGuan Fortress today. Built in 1372, the fortress was considered to be both the western tip of the Great Wall and the western boundary of the Chinese empire. Your visit will then continue to the Overhanging Great Wall (Xuanbi Changcheng) that connects the JiaYuGuan Fortress to the Mazong mountain range. This afternoon, tour the Wei Jin Tombs. These brick laid tombs are said to be the largest underground gallery in the world. Return to JiaYuGuan this afternoon for an evening flight to the ancient capital city of Xian. Your local English-speaking guide and driver will meet you and transfer you to your hotel upon your arrival.
Day 13 : Xian
meals: B/L
Begin your tour of Xian at the Terracotta Warriors and Horses Museum. More than 8,000 life-size warriors, horses and chariots are on display in three separate pits. Created more than 2,000 years ago to guard the tomb of China's first emperor, this royal army is one of the world's greatest archaeological discoveries. In the afternoon, visit Xian's ancient city wall where you can enjoy panoramic views of the city.
Day 14 : Xian/Beijing
meals: B/L/D
After breakfast, visit the Shaanxi Provincial History Museum for an in-depth look at China's extensive history. Displays include fossils, instruments, weapons, clothing, pottery, artworks, a 4-horse bronze chariot and warriors excavated from the site of the Terracotta Warriors and Horses. Magnifying lenses are set into the glass of some displays, allowing visitors to have a closer look at small items. Continue your tour at the Wild Goose Pagoda originally constructed in 589 AD. 7-storeys and 64-meters in height, the Wild Goose Pagoda houses various Buddhist sculptures and scriptures. After dinner, get onboard the overnight express train to Beijing.
Day 15 : Beijing/USA
meals: n/a
Arrive at Beijing early this morning. Your private English-speaking tour guide and driver will meet you at the Beijing train station exit and send you to the Beijing International Airport for your returning flight to the US.